Over last few weeks I have been reflecting on my past work, and one big idea which hit me – when you begin something, anything, you really, really suck.

We see the very final polished versions of products and ideas when we consume them, hence it is hard to imagine how raw, unformed, and fragile these were in the earlier days.

Let’s look at Apple. The poster company for products which have great craft and aesthetics.

Quite different from its current avatar, isn’t it?

If you saw that logo in 1976, you would have no clue what it could become later.

Then there is this very first marketing brochure from Apple, it has a typo in the very first line. So much for – thinking different.

And I think you already have an idea what the current ads look like.

But it’s not just the marketing, it’s also the product. When you think of an Apple computer today, you probably think of something like this:

But the first Apple Computer, the Apple I (for which we just saw the ad), was this:

Side by side, for better contrast:

But of course, it’s not just Apple.

Here is an early sketch for an industrial product, which looks like a child made it: 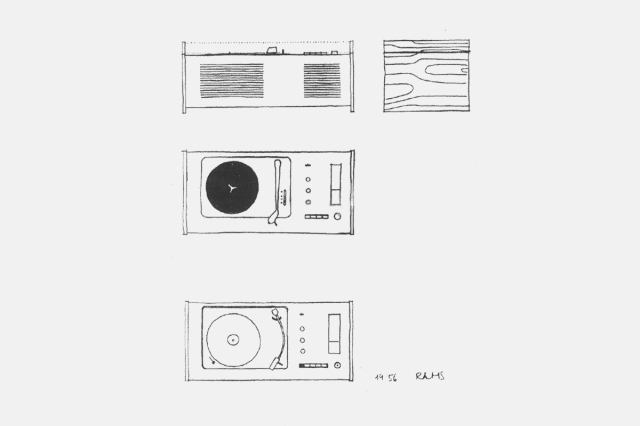 I first saw this at the house of a designer friend and I wondered why he had them on his walls.

Then I found that these were by the Dieter Rams. The German designer who is credited with iconic designs for Braun products. There are claims that Apple copied the iPod from Braun radio.

The above ‘childish’ sketch led to a design which is now found in museums:

And it’s not just physical products. Digital products – from Stripe to Amazon to Google have the same story – a very raw product at the start, which grew into something truly awesome.

I want to say 2 things through these examples – we need to retain a growth mindset, and the first days of ideas are very important.

This is the the belief that you can learn and grow and improve. You are not ‘fixed’.

If you are a creator, you can rest assured that the first version of what you make will suck. It could be a book, an app, a song, anything. But if you get started and continue the work, things will improve with time and iteration.

And they will improve dramatically.

(This is a reason why one can be optimistic about Amazon, they have a solid process for creating successful products.)

In the same way, as individuals, we can grow if we realize that our abilities and skills are not fixed.

As adults, we get comfortable with our routines. We have our bag of skills which works in our world. So when we try out something new, we can feel a sense of shame. After all, we are good at all the usual things.

As the Nobel prize winning economist Herbert Simon pointed out:

I have seen this when I ask people to sketch something on a piece of paper. While almost everyone drew in their childhood, they left drawing at around the 5th grade level and now feel a sense of dread when asked to draw a simple thing. The ‘inadequacy’ shows visibly and they don’t want to confront it.

It’s very easy to forget how fast humans can learn and improve. Even adult humans.

But you see great results when you are able to handle this discomfort.

The first days of ideation

These stories of how ideas evolve also underscore the importance of the first days of ideation. As Jony Ive mentions in his tribute to Steve Jobs:

He [Steve Jobs] treated the process of creativity with a rare and wonderful reverence.

I think he better than anyone understood that while ideas ultimately can be so powerful, they begin as fragile, barely formed thoughts. So easily missed, so easily compromised, so easily just squished.

As I looked back at some of my work, I found some pictures of post-its, sketches, and mind-maps on a whiteboard – which later became hi-fidelity projects.

I realized how critical the ‘whiteboard’ phase was in the process. The final design looks appealing, but the core of the idea is on that whiteboard, competing with other good ideas. In retrospect, we have no way of knowing which were ‘better’, but we can see how the initial thoughts, hunches, explorations – define the final shape.

I wonder if many companies spend enough time on the whiteboard. Looking at multiple directions (including those which suck), trying to think of radically new things, and then pressing the pedal on learning and improvement until the idea takes form.

But I am convinced that the people and companies which do this, repeatedly, see unexpected rewards.